I have a confession to make

We talk a lot about “labels” in the Catholic blogosphere: conservative, traditionalist, liberal, progressive, and so forth. Usually, we talk about how vaguely defined they are, and I have made it one of my goals in life to reclaim the work of figures like Russell Kirk in giving them clear definitions. Some say we shouldn’t have ‘labels,’ that we’re either faithful Catholics or not. I disagree: there is a wide range of thought within the spectrum of orthodox thought. Just as a Catholic can be Benedictine, Carmelite, Franciscan, Ignatian, etc., in terms of spirituality, or philosophically follow Augustine, Anselm, Albert, Aquinas, Bonaventure, Scotus, Pascal, Woytyla or even (yes) Descartes, and remain orthodox, so too do our labels about theories of interpretation of law (both ecclesiastical and civil) have a role.

However, the label I wish to discuss today is that of a “Catholic geek.” It’s a term that I thought I had coined about 10 years ago, and have since found it to be used quite commonly. Some have argued that the term “geek” has lost all meaning itself, since it’s now “popular” to call oneself a “geek” or “nerd”, although merely liking science fiction does not a geek make. Arguing whether “Han shot first” (or even knowing what that means) makes one a geek. Knowing what “BBY” means makes one a geek. A history teacher I know was once grading papers and expressed surprise that a student identified the “Great Schism” as happening in “4250 BBY”. I said, “That’s 4250 Before the Battle of Yavin!” And then, she went on to tell me she had Googled it and “found a site called ‘Wookiepedia.'” Apparently, the student had tried to Google the answer and found the “Great Jedi Schism.” I said, “Yeah, I read Wookiepedia all the time. It’s the _Star Wars_ site on Wikia.” She said, “I don’t know what’s more depressing: that my student Googled and answer and thought that was real, or that you know what BBY means.”

That’s what makes a “geek.”

Anyway, just as some ask whether a “conservative Catholic” is a Catholic who’s conservative about doctrine or poltiics, and just as there is debate about what “Catholic literature” means, so too there is ambiguity about whether “Catholic geek” means “a geek who’s a Catholic” or “someone who’s geeky about Catholicism.” For example, I recently received a PM on Facebook from a fellow who said, straight out, “I have Asperger syndrome, and have chosen Catholicism as my interest.” I wasn’t quite sure whether he meant that he *was* Catholic or that he had an intellectual curiosity about the faith. Since most people I know who call themselves “Catholic geeks” tend to fit both descriptions, it seems to be a negligible difference.

However, there’s one thing that seems to unite all “Catholic geeks,” and here’s the confession I have to make, and it risks damaging my self-identification: whether they’re “geeks who are Catholic” or “geeky about Catholicism,” all “Catholic geeks” love Tolkien.

It’s not that I dislike Tolkien’s work. I just can’t get all fired up about it, and don’t blame Peter Jackson: after Rankin & Bass, he’s the reason I like Tolkien at all. There’s something about his style that just doesn’t appeal to me.

When I first picked up _The Hobbit_ after reading all the C. S. Lewis I could get my hands on, which like many others I intuited I should, I couldn’t make any sense out of it. Lewis’s writing is light and easy and friendly. Tolkien makes up all sorts of complicated words and uses lots of Dickensian description. I’ve always loved the Rankin & Bass _Return of the King_ but could never quite get into _The Hobbit_, and kept forgetting why. Then came the Jackson _Lord of the Ring_ trilogy, and, while I found it extremely long and hard to sit through, I appreciated it. However, while I have always wanted to see the extended versions (I think I’ve seen _Fellowship_ but not the others), it’s never been a “must see” for me, because I know it will be a chore to watch. When the movies inspired me to read the book(s), it took me years to get through (but there are several reasons for that–I really did enjoy it and tore through it when I sat down to read it).

When _The Hobbit_ was announced, I was kind of enthused. Then I scratched my head to learn it was going to be *three* movies. Then I read all the negative reviews, and I decided I didn’t want to see it in the theater. I have insisted for the past year that I haven’t yet seen _An Unexpected Journey_, but apparently I did: I guess I watched it with my father-in-law the night before I left for Charleston for my descending aorta surgery, but slept through most of it and had the memory wiped out by the anesthesia–as I hardly remember anything from those days before the surgery.

So, when my in-laws came for Christmas, they begged me to see _Desolation of Smaug_, and I insisted, “I still haven’t seen the first one!” They were like, “but you have!” Thinking I meant lack of access, rather than lack of interest, my brother-in-law kindly bought my a blu-ray copy for Christmas, gave it to me on Sunday, asked me to watch it that night so we could go on Monday(!)

I found it slightly better than I’d expected–there *were* about 20 minutes of good dialogue in the whole movie, but it also reminded me why I never liked _The Hobbit_. Some are complaining about the stuff Jackson *added* to the book, trying to make it more like “Lord of the Rings”, but much of what bothered me was apparently out of Tolkien, since it’s in the Rankin * Bass version and reminds me why I find it so forgettable: or else, a good half hour to an hour of dwarves burping and being rude, then the scene with the trolls around the campfire, and the part about Goblin Town. I may have picked all of those up in March, but I’m pretty sure they’re in the cartoon a well. It’s really kind of gross.

That said, there was some good dialogue: Gandalf’s statement to Bilbo about true courage being the ability not to kill seems to sum up much of the theme of all four books (_The Hobbit_, _The Fellowship of the Ring_, _The Two Towers_ and _The Return of the King_). By the ending, I was a bit more eager to see _Desolation_ once it comes out on home video, but it was not enough to overcome my post-surgical lack of interest in movie theaters.
$

Snow White and the Seven Sacraments

Pets for the Ethical Treatment of Anthropoi 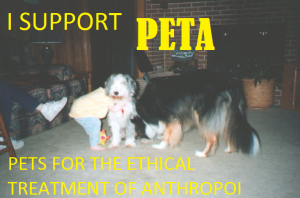 (This one is mine)

The Lewis Crusade
Blog at WordPress.com.