Even many who profess faith in Christ insist that “gay marriage,” even as a civil entity, doesn’t hurt anybody.  Examples like “husband” and “wife” being changed everywhere to “spouse 1” and “spouse 2” should be enough for starters.  Then there is the increasing persecution of those who oppose the homosexualist political agenda: CEOs being fired from companies they co-founded,

Brendan Eich, who helped invent Java and Firefox, fired from Mozilla for a $1000 donation made 6 years ago.

and nuns being persecuted by the Church.

Should be speaking everywhere, not silenced

Of course, the latter was justified by “Catholics” bearing false witness against the Holy Father by saying his statements that homilists must talk about more than a few disjointed moral teachings means that none of us is supposed to talk about the specific examples, ever.

It all goes back to my old saying that we lost the Culture Wars before they began, at the 1929 Lambeth Conference.   The slippery slope that  led us to the current gay marriage debate started when the Anglicans became the first Christians to permit birth control, as Pius XI and Paul VI predicted.  Anyone who has tried to teach Catholic morality even in CCD, much less Catholic school, in the past generation or two knows how awkward it is to tell kids divorce and remarriage is a sin when their parents are divorced and remarried, that swearing is a sin when even their mothers cuss like sailors, or that birth control is a sin when everyone else uses it.  I went to high school with kids whose parents were NFP instructors, and even *they* would say things like, “It’s a sin for us but not for other people,” or “It’s better to tell teenagers to use birth control than to have them get pregnant or STDs.”

I think the persecution of Sr. Jane Dominic Laurel, OP, STD, has as much to do with her speaking about the negative consequences of divorce as anything else.  Indeed, the claim of Aquinas College that Sr. Jane is outside her academic credentials by talking of anthropology negates the traditional hierarchy of academic disciplines that a Dominican should be the first to recognize. 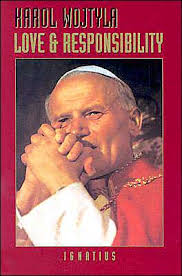 Soon-to-be St. John Paul II, who doesn’t mince words in Evangelium Vitae about the Conspiracy of Death, writes in Theology of the Body that the entire of Catholic anthropology is based in the Creation Account: indeed, that is the whole point of TOB.  From man being made male and female in the image of likeness of God and to be “one flesh” to the fact of Original Sin, JPII’s explication of the first three or four chapters of Genesis and Jesus’ teachings on marriage shows how everything else in theology stems from those passages.  He argues that the danger of Darwinism, and its importance to secularists, is that without a Creator, without teleology, without man being a soul/body hybrid, without Original Sin itself, then man is not a moral creature, and ultimately anything goes.

Something similar is at work in the Culture Wars in the contemporary West.  From contraception at one end to “marriage equality” at the other, advocates of “most favored sins” tend to promote each other’s cause: nobody wants to be perceived as a “hypocrite,” after all.  If some “bossy” Thomistic nun wants to start talking about sexual morality, then so much for “voices of women in the Church”!

And that’s the ultimate agenda of the Culture of Death (and, yes, Pope John Paul himself states repeatedly in Gospel of Life and elsewhere that it’s a conspiracy).    It’s even the agenda of those who, in the name of preventing child abuse, expose children to graphic “sex education.”  Obviously, Satan wants everyone in Hell, and Satan’s agents, whether they realize they are or not, need to encourage others to sin so they can feel justified in their own filth.

The 1988 Don Bosco film that used to run on EWTN before the 2004 version came out has subplots involving a brothel next door to St. John’s Oratory.  In one scene, there’s a commotion outside the brothel: two prostitutes get into a “cat fight.”  The boys stop their play and study to see what’s going on.  The Saint cuts through the crowd and pulls the two hookers apart.  “You people can drown in your sins, if you want!” he cries.  “But if a single one of my boys is lost because of you, not one of you can be saved!”

Harsh, you say?  Remember Our Lord calls for anyone who causes a child to sin to be drowned (Matthew 18:6).

When I can no longer watch Wheel of Fortune with my kids because of a contestant introduction like, “So you’re getting married? . . . You found some nice young lady to marry you?” “Gentleman, actually,” that affects my family.
When we’re watching The Middle, and an ad comes on for Modern Family with two men talking about “their wedding,” and a cake topper with two men, that affects my family.
“Why?” asks the person who actively or passively supports same sex marriage.  “Are you afraid of them?  They’re nice people.”
No.
“Do you think you’re kid’s going to be gay?”
No.
Every child at some point wants to know why boys can’t marry boys or girls can’t marry girls, and “because they’re not supposed to” is usually a sufficient answer.

When that stuff is literally everywhere, there comes a point when parents are forced to explain certain things to children that are not otherwise age appropriate–and that’s exactly what these demonic perverts want.

5 responses to “Why “Gay Marriage” Matters”