Of all the stupid examples of “Common Core” I’ve seen

This has to be the dumbest: 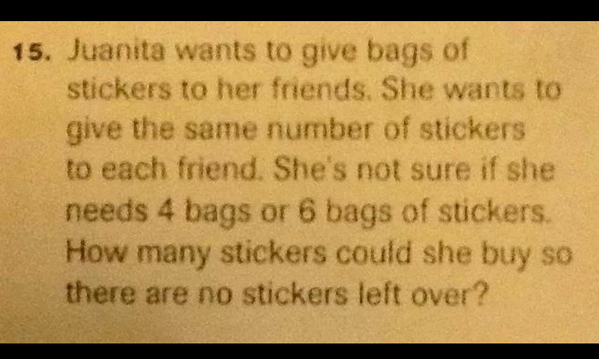 I’m as pro-homeschooling/”parents are the primary educators of their children”/subsidiarity anti-educational bureaucracy as the next paleocon. I’ve seen some legitimate complaints about “Common Core,” besides the complete destruction of local authority and academic freedom, such as math problems where the solution is “the most correct,” rather than simply “correct.” One of the first such examples was something like 357 + 249 =
Students were asked to use multiple methods of estimation to show that the answer could be estimated at 500, or estimated at 600, but the “most correct” response was 606-or whatever the particular numbers were in the example. Recognizing the importance of estimation as a step, I still think it’s stupid to confuse the issue by using “multiple answers” in one problem, and saying that the “correct” answer is “the most correct.” After all, if math is subjective, then everything is, and if that’s how accountants and bureaucrats do math, that explains both our government and corporate America.

Nonetheless, many examples of how bad “common core” supposedly is seem to say more about the people presenting them. If I see a hand-written example of a “Common Core Assignment,” and the person can’t spell properly, it kind of diminishes their credibility. It would be nice to see the original assignment photocopied, as presumably in this case.

Many of the “Common Core” math strategies that get criticized are the same strategies that have been used successfully for years by private tutoring services and charter schools–the same ones that NCLB-type (neo)conservatives advocate as being so much more effective than “failed” public schools.
Similarly, (neo)conservatives complain about how we’re failing to “compete” with schools in other countries, or how kids in the US were expected to know far more by the time they finished 8th grade 100 years ago than they’re required to know today, how to get into college 100 years ago you needed Latin and Greek but now people graduate college without basic English, etc., yet suddenly it’s “Why is my kid being required to know this in elementary school when I didn’t learn it until middle school or high school?”
Those kinds of self-contradictory arguments only serve to undermine our cause, especially when they come from homeschoolers.
People get so reflexively angry about “Common Core” that they want to search out any fault they can find and then shoot the messenger when told that the fault they’re finding isn’t in the problem.

As the saying goes, “There are three kinds of people in this world: those who are good at math and those who aren’t.”
I’d say it’s more like, good at math, good at elementary math but not higher, good at higher but not lower, and just not good at math. I’m in the third category. My brain isn’t wired for memorization, partly because I want to understand how things work. Common Core seems to be targeted at explaining processes, so kids are better prepared for higher level math, but it doesn’t work for those whose brains are wired for memorization, and that is the real problem with “Common Core,” No Child Left Behind, and everything in between: you can’t standardize education because you can’t standardize people.

While there is something to be said for accompanying our prayers with promotion of devotion, we must also be careful of turning prayer to superstition. Even, and especially, if they refer to “God,” “Angels,” or Saints (Therese seems to be particularly a victim of this), emails/memes/etc. that make “promises” if you share them and/or, worse, threats if you don’t constitute violations of the First Commandment, per the Catechism:

2111 Superstition is the deviation of religious feeling and of the practices this feeling imposes. It can even affect the worship we offer the true God, e.g., when one attributes an importance in some way magical to certain practices otherwise lawful or necessary. To attribute the efficacy of prayers or of sacramental signs to their mere external performance, apart from the interior dispositions that they demand, is to fall into superstition.41

. . .
2116 All forms of divination are to be rejected: recourse to Satan or demons, conjuring up the dead or other practices falsely supposed to “unveil” the future.48 Consulting horoscopes, astrology, palm reading, interpretation of omens and lots, the phenomena of clairvoyance, and recourse to mediums all conceal a desire for power over time, history, and, in the last analysis, other human beings, as well as a wish to conciliate hidden powers. They contradict the honor, respect, and loving fear that we owe to God alone.

2117 All practices of magic or sorcery, by which one attempts to tame occult powers, so as to place them at one’s service and have a supernatural power over others – even if this were for the sake of restoring their health – are gravely contrary to the virtue of religion. These practices are even more to be condemned when accompanied by the intention of harming someone, or when they have recourse to the intervention of demons. Wearing charms is also reprehensible. Spiritism often implies divination or magical practices; the Church for her part warns the faithful against it. Recourse to so-called traditional cures does not justify either the invocation of evil powers or the exploitation of another’s credulity.

2119 Tempting God consists in putting his goodness and almighty power to the test by word or deed. Thus Satan tried to induce Jesus to throw himself down from the Temple and, by this gesture, force God to act.49 Jesus opposed Satan with the word of God: “You shall not put the LORD your God to the test.”50 The challenge contained in such tempting of God wounds the respect and trust we owe our Creator and Lord. It always harbors doubt about his love, his providence, and his power.51

2120 Sacrilege consists in profaning or treating unworthily the sacraments and other liturgical actions, as well as persons, things, or places consecrated to God. Sacrilege is a grave sin especially when committed against the Eucharist, for in this sacrament the true Body of Christ is made substantially present for us.52