Pope Francis and the Third Secret of Fatima

Around the world, there have of course been many reactions to the election of Jorge Maria Cardinal Bergoglio as the 265th successor to St. Peter. He seems like a nice enough fellow, apparently very saintly in both his preaching and his manner of personal living. 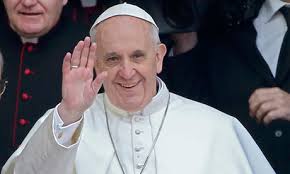 I’m a bit bummed that my preferred choices weren’t picked. I’m especially bummed that, when I heard “George” in Latin, I immediately thought they were referring to George Cardinal Pell, though at least I took comfort that in my “adopt-a-Cardinal” prayers for Cardinal Pell, I had been praying to St. George. According to this Ikon, St. George has hair like me!

To that end, and no offense intended to Cardinal Bergoglio, I was kind of glad they picked another “older” Pope–approximately the same age that Joseph Ratzinger was when he became Benedict XVI. As I noted when B16 retired, 8 years is about the average reign of a Pope, and only a few have served past the age of 85. It isn’t going to be that many years before we face another Conclave, and that’s a good thing for many reasons. Hopefully, younger guys like Raymond Burke and Charles Chaput (who isn’t even created Cardinal yet–I thought he had been) have a chance at the white hat. Also, even *if*, as many traditionalists fear, Francis turns out to be in line with typical priests of his generation, particularly since he’s a Jesuit, that should itself be a sign of hope for the Reform of the Reform: priests have been increasingly more tradition-minded since the eighties. So it may take time and patience, but it will only be a few decades before the young priests who are returning to traditional vestments and postures even in the Ordinary Form will show up at the College of Cardinals. Or the world may blow up before then.

By the way, Fr. Joseph Fessio, SJ, has had some leve of personal connection to both our past two Holy Fathers. He was one of Josef Ratzinger’s favored graduate students, and, as a Jesuit, he knows Cardinal Bergoglio (though I’m not sure how well). He’s been quoted as saying, “You’ll love him. The other Jesuits hate him. I’m ecstatic.” Fr. Dwight Longenecker has pointed out that while liturgical, theological and political “sonervatism” and “liberalism” often go hand-in-hand in the US, that is not the case in other cultures.

Now, Francis is kind of cool looked at by himself. He appears as a modern equivalent of Monsiegnor Bienvenu in _Les Miserables_. Indeed, his first words as Pope were the Spanish (or Italian?) equivalent of “Bienvenu”! That said, there have been a *lot* of bishops like this. They may be few and far between, but they aren’t unheard of. Let’s recall that a couple American archbishops have sold their formal residences and moved into cathedral rectories or diocesan seminaries to pay off legal debts left by their predecessors.

That’s what really irks me about a lot of the coverage on Francis (BTW, he’s not “Francis I” because he’s the only one–however, after 36 years of “JPII” and “B16”, F1 as an acronym seems natural).
B16 was, as someone put it, the “best dressed Pope” we’ve had in years. While it may impress a lot of people to have a Vicar of Christ who dresses “humbly”, it also hurts a lot of Catholics to see Popes, or bishops, acting beneath the dignity of their offices–where it counts. Even Hugo’s Msgr. Bienvenu (who is based upon the real life bishop, and is probably about as historical an account as most pre-1850’s historical documents and biographies) dressed formally for Mass. And the thing about Cardinal Bergoglio/Pope Francis is *we don’t know*. He’s technically not even officially Pope yet.

Nevertheless, Cardinal Ratzinger was known before his papacy for shunning some of the elitist trappings Cardinals are known for. He would walk and take buses and trains, too. He was known for hanging out at local establishments around St. Peter’s, and early in *his* papacy people wondered if he might shun the Popemobile or be a pain in the neck to Vatican security.
Never was this Facebook meme more appropriate:

The Chattering Classes keep insisting that Cardinal Bergoglio’s behaviors indicate we “finally have a Pope of the people!” This implies that a humble theologian who only served at the Vatican out of obedience and never wanted anything more than to be back in Germany with his beloved brother, who was known for hanging out at local pubs and cafes, was *not* a “Pope of the people.”

As Cardinal Archbishop of Krakow, Karol Wojtyla, OCDS, slept in a broom closet. He was known for opening the doors to the poor every morning and inviting them in to share his meals. Here he is on a fishing trip while a cardinal (note his brown scapular).

Like “Msgr. Welcome”, Woytyla was uncomfortable with being called “Bishop” or any of the higher ranks he was promoted to. He preferred that his parishioners, students and friends call him “Uncle.” When he was first appointed as auxiliary bishop of Krakow, he assured his friends “Uncle will remain Uncle.” He was known for various athletic activities, particularly skiing.
One of my favorite stories I read in a biography when I was in high school concerned a skiing trip Wojtyla took with a bunch of priests. Since he preferred to be called “Uncle” (not sure if there’s some other Polish tradition attached there I’m unaware of), or “Father Wojtyla,” that’s how he was addressed by other priests.
Ordained a bishop at 38, created cardinal at 47, and elected Pope at 58, and very athletic and healthy until the ravages of papacy and Parkinson’s took their toll, Cardinal Woytyla came off to those who knew him as an ordinary young pastor.
Thus, on this particular ski trip, since most of the other clergy called him “Wujek” (“Uncle”), a particular grumpy and authoritarian old Monsignor kept ordering this “young priest” around: “Fr. Karol, get me a cup of coffee,” that sort of thing. All weekend long, Wojtyla humbly and happily served this old vicar hand and foot. Every time the old man raised his voice, the other priests would hesitate, expecting the reaction most Cardinals would give to such treatment. Finally, on the last day of the trip, one of the priests gently informed the Monsignor that the “young priest” he was bossing around was the Cardinal Archbishop of Krakow. He had the reaction one would expect from such a humiliation, but Bl. JPII never once grumbled, raised his voice or pulled rank on him.

So it really annoys me to hear and read all this garbage about how Cardinal Bergoglio is more humble and more down to earth and more like a “true disciple of Christ” than any of his predecessors.

Indeed, all of this brings with a huge caution. Much has been made of the alleged “Prophecy of St. Malachy,” a text of dubious provenance that seems to describe each Pope. The prophecy is allegedly “validated” by the fact that a church in Rome (I think St. Paul’s outside the Walls) has little cameos of the Popes, with the alleged prophecy’s nicknames for them, and there is only one space left–for Pope Francis. Even if the St. Malachy “prophecies” are true, and there’s a lot of evidence they aren’t, the prophecies technically say that “Peter the Roman” (presumably Francis) will be a great leader who will guide the Church through a time of crisis–and then Rome will be destroyed. The prophecy does not necessarily imply the End of the World, just the end of Rome. It also doesn’t say “Peter the Roman” will be an anti-Pope–though the “St. Malachy” text gets conflated with a lot of other alleged “prophecies” about end times Popes and anti-popes. Coded “messages are hard enough to decypher, but they become especially open-ended when people try to mix them all together.

In 2000, Pope John Paul finally revealed the Third Secret of Fatima, via the controversial Cardinal Sodano. Now, I’m not a big fan of conspiracy theories that say this wasn’t the “real” or “complete” Secret, particularly based upon claims spread by some sources that otherwise have little credibility, who insist on their own word that Sr. Lucia or somebody else said it wasn’t the “real” secret. However, after the prophecy was revealed and decribed, I wondered if they were jumping the gun a bit (so to speak) in insisting that it had been fully fulfilled.

After all, the Pope in the prophecy *dies*.

In the *only* two Vatican-approved apocalyptic prophecies about the Pope–Fatima and John Bosco (and when the Fatima announcement came out, people immediately pointed to the similarities to John Bosco’s dream), the Pope is shot and killed. JPII was not shot and killed. He was shot and lived. B16 seemed to fulfill some prophecies by his actions, his symbolism, and how JPII and Sr. Lucia died within a month of each other, but the similarities between Bergoglio and Wojtyla are uncanny. Wojtyla also shunned Vatican security when he was first elected. He tried to be a “Pope of the People” (he certainly was) and live as Pope the way he did as Archbishop for 3 years–until he was shot. *After* he was shot, he took on more of the trappings of the Papacy (and, some say, got more “conservative” when he read the Secret of Fatima, realized it was true and about him, etc.).

I always expected Pope Benedict to be assassinated given the animosity towards him, his statements about Islam, and his position vis-a-vis these approved prophecies, but Pope Francis’s similarities to JPII make me think we will one day be praying to St. Francis, Pope and Martyr.

6 responses to “Pope Francis and the Third Secret of Fatima”