29 years ago, give or take, I heard Barry Manilow sing “Memory,” and it changed my life. 21 years ago, I heard Barry Manilow sing another song from a musical, and it also changed my life. That song was “Bring Him Home,” and it inspired me to go out and get a _Les Miserables_ soundtrack. When I was 6 years old, but already quite worn and worldly from 6 years of pain, “Memory” spoke to me. Given similarity of style and popularity, _Les Miserables_, by Claude-Michel Schönberg, Alain Boublil, Jean-Marc Natel, Herbert Kretzmer, and Trevor Nunn (who also wrote the lyrics to “Memory”), is often grouped with Andrew Lloyd Webber’s shows. After all, Cameron Mackintosh produced all the great Broadway/West End “hits” of the 80s: _Phantom_, _Cats_ and _Les Mis_. Trevor Nunn directed both _Cats_ and _Les Miserables_ and contributed to incidental lyrics of both (as well as winning the competition to write “Memory,” beating out Tim Rice and Richard Stilgoe).

Where “Memory” embodies my deep loneliness and hope for a better life in Heaven, “Bring Him Home” has always symbolized my constant shadow of mortality. For my parents, it represented their fear of my passing and hopes for me to experience a fuller life in this world–Mom used to always say, somewhat facetiously, “I hate this song.” For me, I would think of my little nephews (now grown up), and how I didn’t expect to make it past my teens. Today, it represents my hopes for my own children’s future as I face my mortality in a more impending way than ever.

So, today, I sat in a theater with my two oldest girls, who have watched the two concert videos with me several times, and I tried to hold the tears in. They burst out when we heard Hugh Jackman singing “Bring Him Home,” and I grabbed Allie’s hand.

Back in 2004, I said _Phantom of the Opera_ and _Passion of the Christ_ were the two best movies I’ve ever seen. THIS is, hands down, the best movie I’ve ever seen, and combines the best qualities of both those films, plus some. As Sr. Rose Pacatte put it, “this is the Gospel.” I kept crossing myself, saying Kyrie’s, saying Reqiuem aeternams, etc., while I was watching it.

For a movie that ought not to have much room for spoilers, there are a couple big ones. Here’s a hint: my dad’s favorite line from the novel is Cosette saying, “Should we call a priest?” and Jean Valjean, looking at the candle sticks, says, “No need. I already have one.”

There’s an addition of a symbolic flagpole that comes to represent the Cross. It is arguably the most Catholic movie I’ve ever seen. They amp up, rather than downplay, the religious themes of the book and the stage musical. The candlesticks have a wonderful symbolic role. Javert’s suicide is exactly how it’s described in the book, save for the quotation from Victor Hugo’s narration I love: “How to turn one’s resignation in to God?” It’s right at this whirlpool in front of Notre Dame.

I stand by my original assessment from the previews and the album that Russell Crowe’s Javert reminds me of Glenn Close’s Norma Desmond: he’s not *bad*, and acting wise he’s quite good, but his singing is weak, and they obviously changed many of his parts to suit his voice. Hugh Jackman is AMAZING.

As I expected, lots of people applauded, live-theater style, both when the credits began to role and as the names flashed on the screen. There was a roar when Colm Wilkinson’s name popped up, even though it was at the end of the credits.

I was upset that, just as they amplified the religious themes, they amplified the political themes. It would be nice if they acknowledged that the July 1832 uprising didn’t get any support because the vast majority (upwards of 75%) of the French population realized they were better off under monarchy, and they didn’t want to see a repeat of the Reign of Terror.

They work in a lot of the stuff the stage musical leaves out: Marius’s grandfather (he even has a couple singing parts!), young Eponine being spoiled, and most importantly Valjean and Cosette hiding out in the convent. I don’t remember where Hugo identifies the convent as being, but the nuns are clearly Daughters of Charity, which would make it Rue de Bac, St. Catherine Laboure’s convent.

In the book, Valjean picks up Cosette on St. Nicholas Day, which is made obvious in the movie obviously to make it a “Christmas movie,” but unfortunately not as positive a view of St. Nicholas Day as the book uses. In the book, Eponine and Azelma (who is still absent–in the book, Azelma is the only Thenardier kid who survives, and she and her father go off to America and strike it rich as slave traders) get a coin and piece of fruit in their shoe every year, and Cosette gets a lump of coal. He also describes the toy store across the street. In the book, he stays overnight at the inn, and in the morning of St. Nick’s Day, Cosette gets a very expensive coin and some gifts, and Eponine and Azemla have coal! And then when Valjean picks her up, he takes her on a shopping spree at the toy store.

Also, one theme neither the musical nor the movie express is how Valjean in in the book is always sincere in his promises to Javert. At first, he takes Fantine’s word that the Thenardiers are caring for Cosette, and he plans to give them all his money, then turn himself in. When he finds out Cosette’s being abused, he decides he must care for her, and that’s why he breaks his promise to turn himself in. So he keeps hoping to get to where he can be sure Cosette’s safe, and plans to turn himself in. When they move in the convent, he poses as her father and as the groundskeeper’s brother, and pays for her tuition at the school. He hopes she’ll grow up to become a nun, and plans to turn himself in when she enters the convent. Instead, when she turns sixteen, she says she wants to see the city, so he buys a house and they start the life we see in the second half of the musical. Thus, in the book, he’s not jealous of Marius as the musical depicts but happy that Marius represents a chance to fulfill his promise to Fantine so he can then fulfill his promise to Javert. He’s quite sincere when he tells Javert where to find him, but Javert at that point is moved by compassion, confronts his conscience over realizing God values mercy more than justice, and obviously offs himself.

They use my favorite instrumental (“Bring Him Home,” when the stage version shows all the bodies) and use it for an original scene about Javert that is deeply moving.

There *was* some graphic content that made me wince, but thankfully the girls didn’t understand it. The sewer scene was a little too graphic, and I was not the only person who audibly gagged, but horribly symbolic, as well.

While I hope to see it again with Mary Hathaway tomorrow, it was special seeing it with Allie and Gi. I started crying during “Bring Him Home” and hardly stopped. I started clinging to Allie’s hands.

I had forgotten that Valjean’s alias is “Monsieur Madeleine,” since it’s never used in the stage musical. When I *did* know that, I didn’t know that “Madeleine” is French for “Magdalene.”

Two scenes struck me as cinematic allusions to _Passion of the Christ_: Valjean carrying the flagpole at the opening (which was a clear Christ-reference in general but struck me in its grittiness), and the women scrubbing the blood off the street in “Turning,” which reminds me of the BVM & holy women scrubbing the Precious Blood off the torture room floor in _The Passion_.

I kept thinking of John of the Cross and the whole seeing from God’s eyes/Crucifix from up above thing. Every time Valjean or Javert was praying, most of the shots were either from above or deep close ups or whatever so you were looking on him from God’s perspective.

Veneration of the Mysteries of the Sacred Infancy 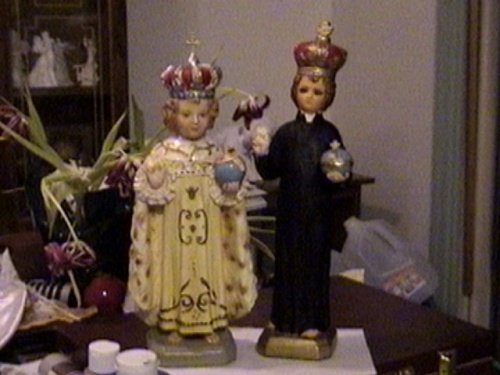 O God, come to my assistance!
O Lord, make haste to help me!
Glory to the Father, and to the Son, and to the Holy Spirit;
As it was in the beginning, is now, and will be forever. Amen.

I.
Jesus, sweetest Child, You came down from the bosom of the Father for our salvation and were conceived by the Holy Spirit. You did not abhor the Virgin’s womb, and, being the Word made flesh, took upon Yourself the form of a servant. Have mercy on us.
Have mercy on us, Child Jesus, have mercy on us.
Hail Mary . . .

III.
Jesus, sweetest Child, You were enclosed for nine months in Your Mother’s womb. During this time You were looked for with eager expectation by the Virgin Mary and Saint Joseph, and offered by God the Father for the salvation of the world. Have mercy on us.
Have mercy on us, Child Jesus, have mercy on us.
Hail Mary . . .

All honor, laud and glory be,
O Jesus, Virgin-born, to Thee;
All glory as is ever meet,
To Father and to Paraclete. Amen.
Christ is near to us.
O Come, let us adore Him.
Our Father . . .

All honor, laud and glory be,
O Jesus, Virgin-born, to Thee;
All glory as is ever meet,
To Father and to Paraclete. Amen.
Christ is near to us.
O Come, let us worship.
Our Father . . .

All honor, laud and glory be,
O Jesus, Virgin-born, to Thee;
All glory as is ever meet,
To Father and to Paraclete. Amen.

The Word as made flesh, alleluia.
And dwelt among us, alleluia.

Let us pray. Almighty and everlasting God, Lord of heaven and earth, You revealed Yourself to little ones. Grant, we beg You, that we may venerate with due honor the sacred mysteries of Your Son, the Child Jesus, and copy them with due imitation. May we thus be enabled to enter the kingdom of heaven which You have promised to little children. Through the same Christ our Lord. Amen.

The Word was made flesh.
And dwelt among us.