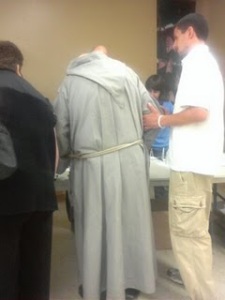 My other shot of Fr. Groeschel. Like my picture of “Mother Angelica” I posted a couple days ago, this was a case of the camera not catching the perfect shot in time. I was trying to capture Fr. Groeschel standing between the proprietors of the St. Francis Shop, our local Catholic book store: Deacon Greg Weigold and his wife Maureen.
Instead, I captured a rather poignant picture of a frail, saintly priest being helped by his assistants.

If Foul Language is not such a “big deal,” then why do people defend it so violently?

I often try to make the point that profanity is prayer to Satan.  When one curses, one literally wishes ill of someone else, and this is, in effect, a prayer to Satan to harm that person.  There are various levels why different kinds of “foul language” violate various Commandments, most notably the first, second, fifth and sixth.

Last year, I reported on the case of McKay Hatch, a young 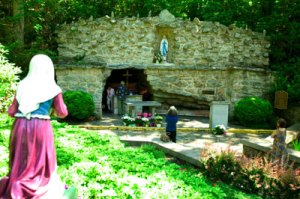 man who started a “No Cussing Club” and received death threats from around the country for it. If profanity is not Satanic, if it’s not evil, if it’s not at the minimum a sign of an immature mind, then why did people go to such lengths to attack someone for protesting against it? It’s not like Mr. Hatch was calling for a ban on profanity; he was just calling on kids and adults to commit themselves to not using it.

Well, a few months back, I started a Facebook page called “I Protest Against Blasphemy,” the name being inspired by a sticker that friends have on their front door.  The  impetus, besides my overall concern with this issue, was the fact that I was tired of seeing some of my Christian, pro-life Facebook “friends” using profanity in their statuses, especially since my children often look over our shoulders on FB, and we allow Allie to play games on our Facebook accounts.

It has proven a popular page, with many “fans” who are not among my establish FB network, and many people offering their own observations, anecdotes about how they deal with public profanity, etc.

Sadly, it’s been a week or two since I’ve checked in on it, and, in that time, a bunch of Satanists and Secularists have “liked” my page just so they could post obscene messages–and, I fear, they may have driven away some of my legitimate members.  Please pray for these sad people whose hearts are so bitter, who are so bound by the Enemy’s chains.  If you are not already a FB fan of “I Protest Against Blasphemy,” and you really do protest against it, please join it by clicking the link above so you can contribute to the true message of the site and helping my group to fight off this infiltration.