I think the most diehard Fundamentalist will agree that covenants are important in the Bible, right?

God establishes a lot of them in the Old Testament.  We often refer to “the Covenant,” but God actually made a lot of them: with Adam, with Noah, with Abraham, with Jacob, with Moses, with Davidetc.

Now, a covenant has terms that both sides need to abide by.  In the Old Covenant, the terms were some variation of the Law.  The New Covenant is not contingent upon strict observance of the Law, though the Law is still the standard by which we should live our lives.

But what *is* the requirement of the New Covenant?  To Fundamentalists, it’s just to confess Jesus as their savior, but that’s a pretty easy term, isn’t it?

Yet Jesus never *SAYS* we can confess Him to be saved.  Indeed, He says just the opposite: “Not everyone who comes to me saying, ‘Lord, Lord’ will be saved.”  Indeed, St. Paul tells us that EVERYONE, in the Heavens, on the earth, and under the earth will proclaim “Jesus Christ is Lord” (Philippians 2:11), so if “all you have to do is confess Jesus to be saved,” then the Devil will be saved.

Only once in the Gospels does Jesus refer to forming a covenant–interestingly, it’s also the only Gospel story St. Paul tells verbatim–the Last Supper.

The only time Jesus refers to making a covenant with His Apostles, He says that the condition of His Covenant is to receive His Body and Blood:

[In other words, if you think it’s just a symbol] 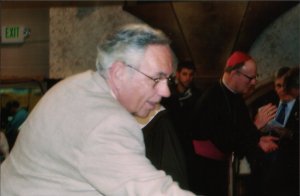 See that little bit of brown, white and black between that fellow’s chin and arm? That’s Mother Angelica. I tried to catch a shot of her as she was leaving the stage after the show, but that fellow–a producer, I think–walked in the way. One of the Franciscan Friars is there, as well as Bishop Molloy again. The fellow in the tie on the right was the actual guest that night. He runs the Holy Face Association out of Montreal.
I tried looking his name up in the archive, but that episode is not there. Now, we have always joked that we were disappointed in the caliber of the guest when we saw _Mother Angelica Live_ live. The week before–when we’d wanted to get married, but various family members’ schedules didn’t permit it–the Wednesday line up was Mother Angelica with Marcus Grodi *and* Jeff Cavins and Fr. Thomas Dubay.
This fellow that we saw was obviously very devout, but he seemed very underprepared. It worked to our advantage in one sense: they took a number of questions from the phone lines and the audience to fill time, and I got to be on international television! Of course, since the episode has apparently been deleted from the archives for its lameness. . . .
Another way it kind of worked out was that we got to meet this fellow again a few years later, when his touring Shroud of Turin exhibit came to St. William of York in Stafford, VA.

Great Lines from _A Man for All Seasons_: On Corrupt Clerics

WOLSEY: Then come down to earth, Thomas! And until you do, bear in mind you have an enemy!
MORE: (Wishing to make sure. Quietly.) Where, Your Grace?
WOLSEY: (Looking at him, hard-faced, harsh; for the first time, we see that this is a carnivore.) Here, Thomas.
MORE: As Your Grace wills!
WOLSEY: As God wills!
MORE: (Ascending the stairway.)Perhaps, Your Grace.
WOLSEY: (Rising and gathering his portfolio and papers together.) More! You should have been a cleric.
MORE: (Half-way up the stairway; amused.) Like yourself, Your Grace?

Why don’t Catholics realize they’re shooting themselves in the foot?

I’m really confused about why Catholics support the French law banning burqas or whatever they’re called.

France has passed a law making it illegal to cover one’s face in public (I thought this was already illegal in the US).  Anyway, people are praising this law, and using the argument, as in the above link, that burqas supposedly aren’t an official part of Islam because it’s not in the Koran.

What about religious habits?  Are we going to sit back and cheer when aFrance, or the UK, or the US decides to be fair to Muslims by banning any religious garb in public?

Straight from the Horse’s Mouth:

We say it, we’re kooks and extremists; They say it and it’s another story: Sr. Jeannine Gramick claims that half of the priests in the US are homosexual.