In a recent Inside Catholic piece, John Zmirak discusses the case of “Darío Cardinal Castrillón Hoyos — now the second-most hated cardinal in the Church, after Bernard Cardinal Law.”

Meawhile, Bill Donohue of the Catholic League has responded to the New York Times’s defense of its collaboration with Archbishop Rembert Weakland, OSB.

not only sought to punish whistle-blowers─he ripped off the archdiocese to settle a sexual assault lawsuit brought by his 53-year old male lover. I added that because Weakland was a champion of liberal causes, the media were giving him a pass for his delinquency in not contacting the Vatican about Murphy for two decades. Hoyt has now joined the chorus.

Which raises the question:

Why are these two men hated

While these three men, arguably responsible for the most egregious acts of facilitation of sexually predatory priests,

are not only *not* hated, but still respected by the mainstream media and members of the Church?

Could this be the reason? 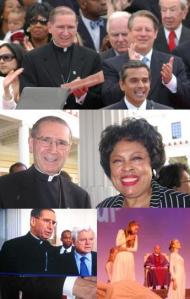 Meanwhile, those regarded as “conservative” will be targeted for *anything*–including an ultra liberal liturgical innovator and Kennedy collaborator like Bernard Law.

Look at how they are also eager to target bishops like Bruskewitz and Vasa for not towing the party line, even while such bishops have stricter policies than anyone else.