Today is the anniversary of one of my great miracles

Almost every year since 1989, I’ve made a novena to the Infant Jesus of Prague on the 16th to the 25th of December (OK, two mostly concurrent novenas).

For the first of those novenas, I prayed to be miraculously cured. Then I discerned that Marfan syndrome was my cross, and that I was not (as I then thought) called to the priesthood but to marriage. So, starting around age 15, I prayed for God to send me my spouse.

In 1999, I signed up for Single Catholics Online (now Ave Maria Singles). On December 8, I e-mailed a new member named Mary from Virginia. For a few weeks, we carried on an interesting correspondence, but I didn’t know if it was going to go anywhere (she says that she was settled on me from my first e-mail, picture and last name). I was used to online relationships at that point, but I was having a hard time deciding where this one was going.

On December 23, Dad and I were watching _It’s a Wonderful Life_. I thought, “I tend to be such a George Bailey, with my big dreams–I need a Mary to keep me grounded. Hey! That girl I’ve been writing to is named Mary, and she says this is one of her favorite movies!”

Well, after watching the movie, I logged onto my AOL account and had a message from Mary!

She had read this article of mine from the 1998 C. S. Lewis Institute:

To think I actually took Christmas off from emailing the answer to all my prayers, and then I let myself get caught up in a new game I’d gotten for Christmas.  I replied on the 23rd, but I noted it would be a few days before I’d get back on e-mail.

A few days later, when I resumed the correspondence, we started a whirlwind exchange that led to our engagement on January 15 and our marriage on July 29, and now here we are, 10 years later! 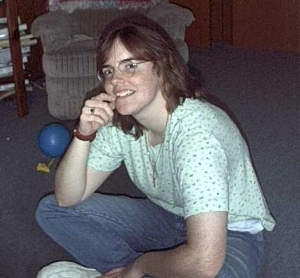 Happy anniversary, my love!!!  Thank you for 10 wonderful years!